NSF TO THE WORLD -Moto3- 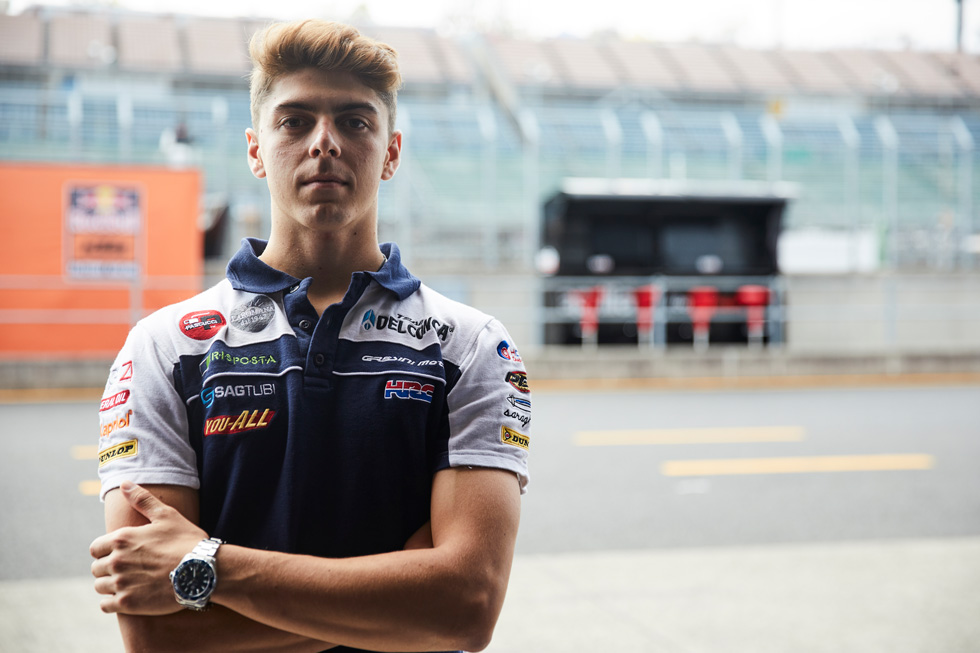 Known as “Diggia” to his friends, Fabio Di Giannantonio is a 21-year-old Italian rider born in Rome. In his third Moto3 World Championship season in 2018, he is currently ranked third with six podiums (including two wins) as of the end of the Malaysian Grand Prix, and is considered a prodigy with a very bright future. When did he start riding?

“My father was a huge motorsports fan, so videos of races would always be playing at home. When I was five, we decided to try out pocket bike racing, and I began competing in the Italian championship, and the NSF100 championship. At first it was like a game to me, but as I continued, I grew a passion for racing, and then decided I wanted to spend my life racing.” 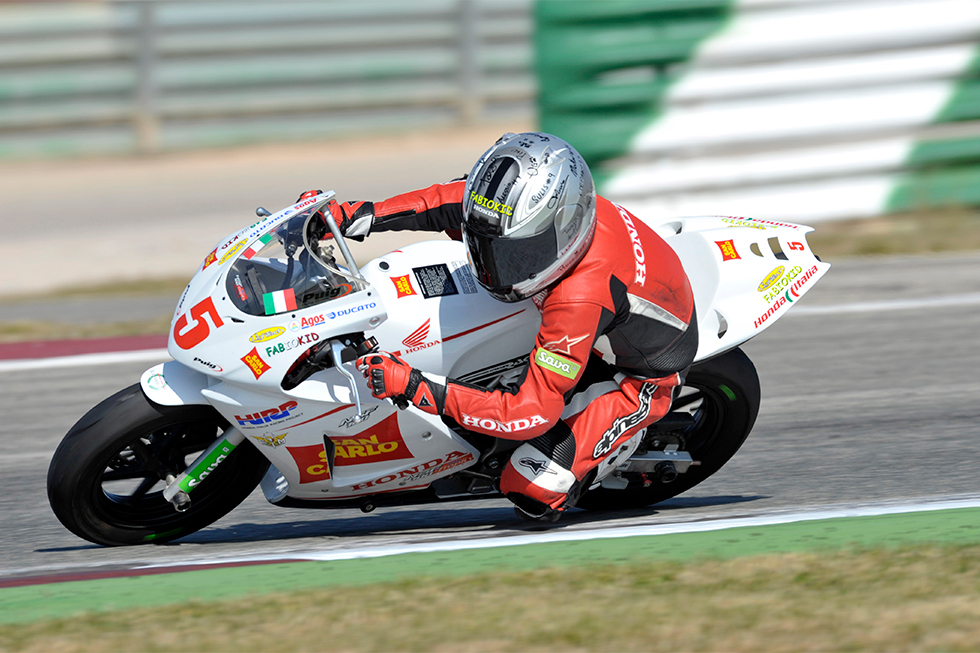 The attraction of the NSF100 championship

“The NSF100 championship I competed in is one-make racing, meaning all riders compete on identical bikes, which was what I found attractive. You have to push harder than anyone else to win. Since the bikes are the same, rider skills such as cornering and speed in the straights make the difference. I’ll never forget the elation I felt the first time I recorded the fastest lap on an NSF100.” 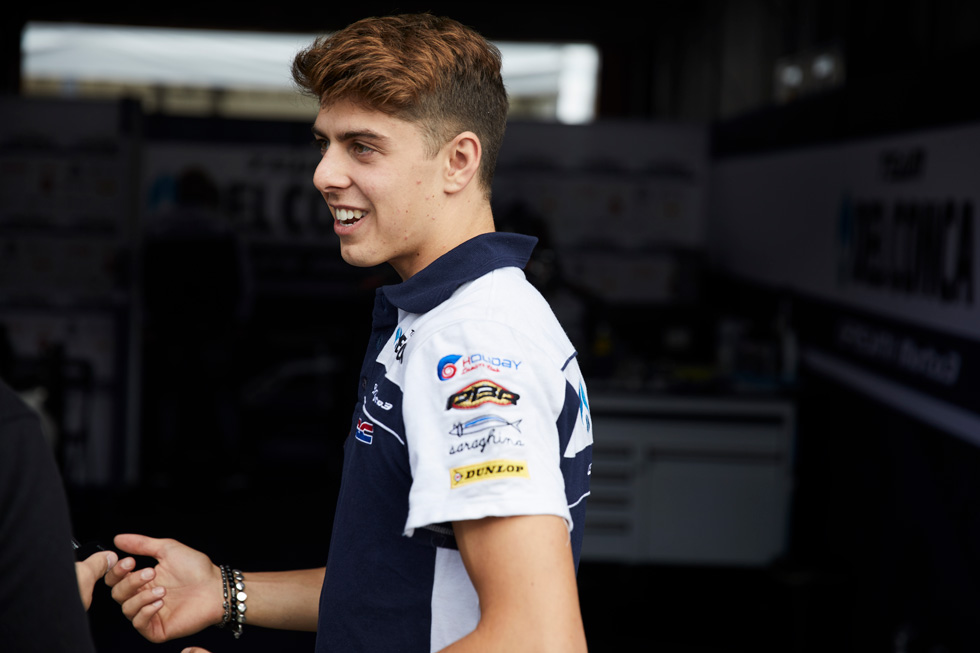 “I think every rider competing in the NSF100 championship are there to grow, because there are a lot of young riders in this category. It’s a wonderful environment, competing with other riders and growing. I learned the importance of pushing with this bike, and then set my sights on always winning. The accumulation of this experience is what led me to the stage I’m at now. I hope everyone will focus on winning.” 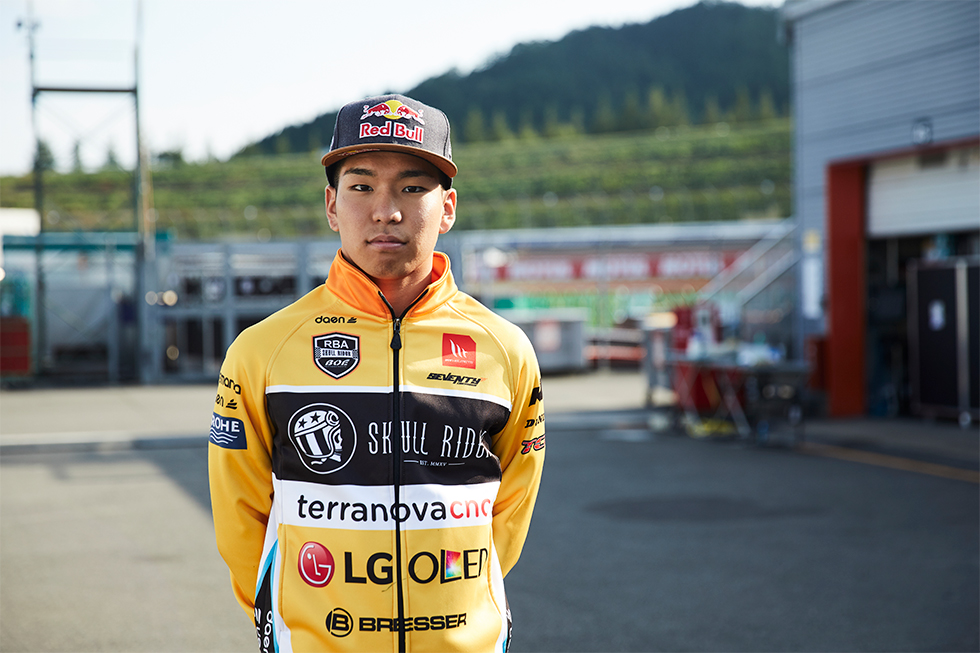 Kazuki Masaki is an 18-year-old rider from Fukuoka, Japan. On his father’s advice, he started riding at a young age. Before he knew it, he had won the MotoGP Rookies Cup in 2017, and had secured a seat for the Moto3 World Championship the next season. Now, he stages fierce battles with riders of similar age in the Moto3 class.

“My father’s hobby was riding motorcycles. He apparently decided before I was born that I would be a rider, and started me when I was 3 years old. First I didn’t like it, but after two years, I fell in love with the sport.” 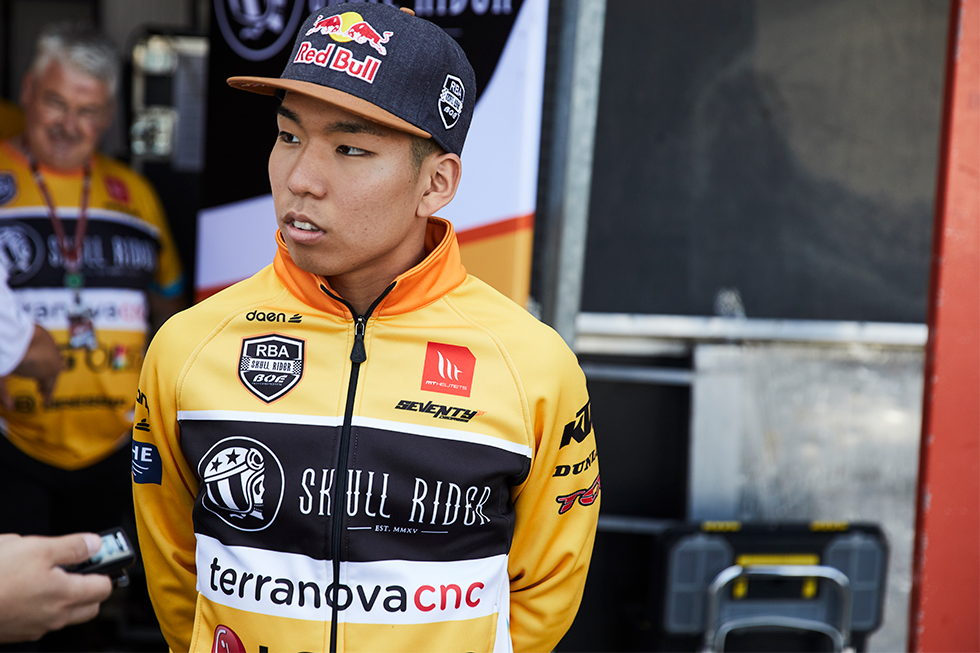 “Most Moto3 riders are around my age. Kaito Toba and Ayumu Sasaki, and Ai Ogura who will be joining us next year, are all my age. Toba and I are even from the same place, and we’ve been racing each other since our pocket bike days, so I’m determined to beat him, especially. Looking back, I’ve always had a rival.”

Techniques honed on the NSF100

“The NSF100 handles fast and has good grip, so it was great for me to practice my skills such as braking at the limit and sliding in the turns. I still practice some of my skills on an NSF100. Riding on a big bike on a big track, weaving through the bends I get slower and slower, so I practice my cornering skills on a lightweight bike like the NSF100. 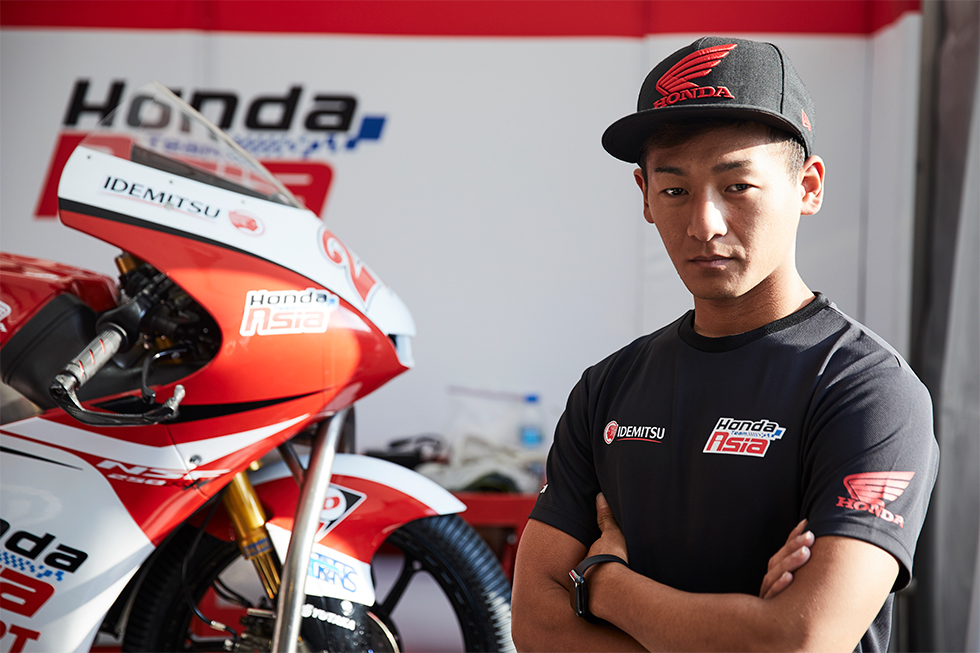 Toba says the desire to become a rider dawned on him at a very young age. He was then on the path to becoming a racer, and in 2017, began his career in the Moto3 World Championship. Under the supervision of HRC team manager Hiroshi Aoyama, a former MotoGP rider and current HRC test rider, he now competes with riders from all over the world.

“Since I was small, I liked sitting behind my father when he rode his bike. After a while, though, I got bored, so I asked for an electric pocket bike for Christmas. I went to the park to ride it, but after a while, got bored. I can’t recall, but my parents tell me that I kept on saying I wanted to ride a bike with an engine. They did some research for me, and ever since I was introduced to the NSF100, there was no turning back.”

The bike that started his championship career

“The NSF100 is why I started racing in championships, including the grand championship. My first ride on even large tracks like Suzuka, was on an NSF100. It taught me the basics, such as how to ride, body movements, and positioning in large groups. A lot of MotoGP riders train on an NSF100.” 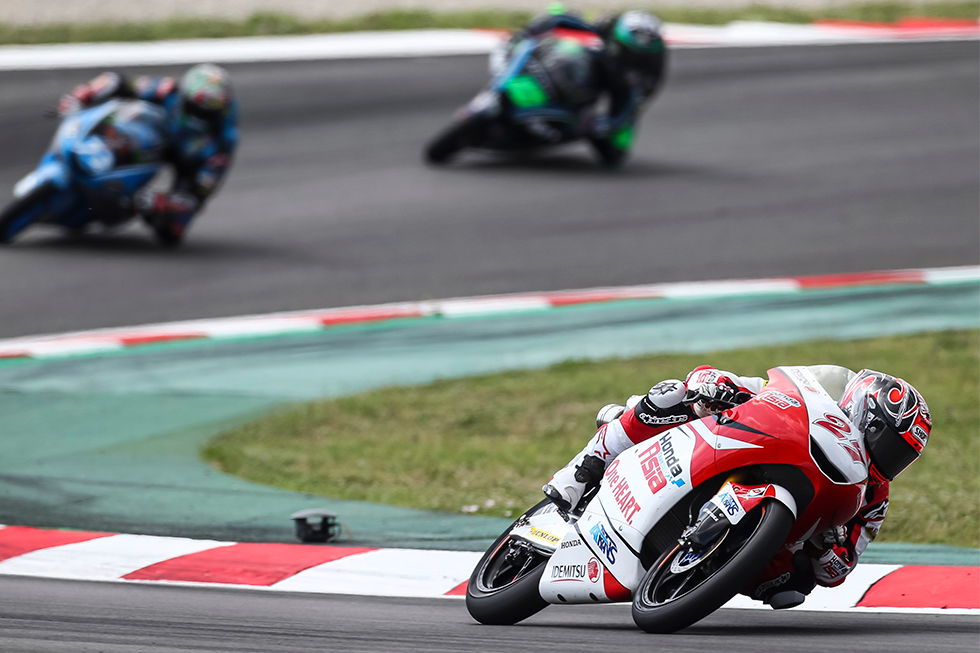 A message to aspiring riders

“Since I was small, I’ve always enjoyed myself when I was riding. And I’ve always wanted to ride faster. I’ve practiced for a long time on the NSF100, and as long as a keep on riding, always aiming higher, the day will come when I can race on the stage that I’ve dreamed of.” 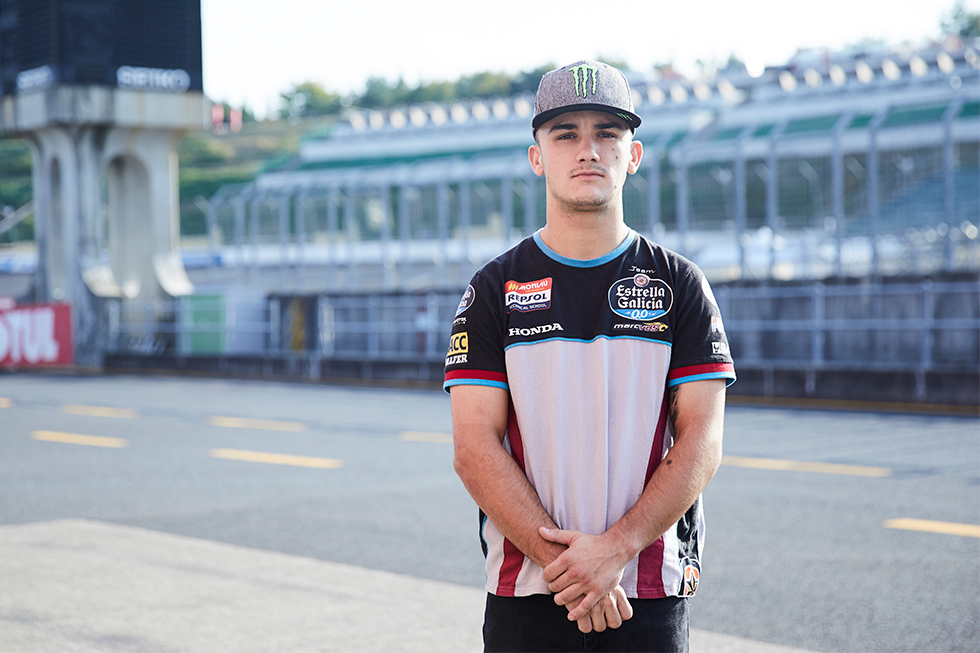 Aròn Canet started racing in the Moto3 World Championship at the age of 16. In 2017 he won three races, and was ranked third. In 2018, he has been on the podium four times, proving himself to be an outstanding young rider. The Spaniard, still only 19, says he chose to start riding at a very young age.

“The first time I rode, I was four. I raced in the Spanish cart championship because of my father’s influence, and I loved motorsports for as long as I can remember. One day my father gave me a cart, but I loved bikes more, so I asked for a pocket bike instead. I don’t recall that, but I’ve always been more comfortable on a bike, and I’ve been riding ever since.” 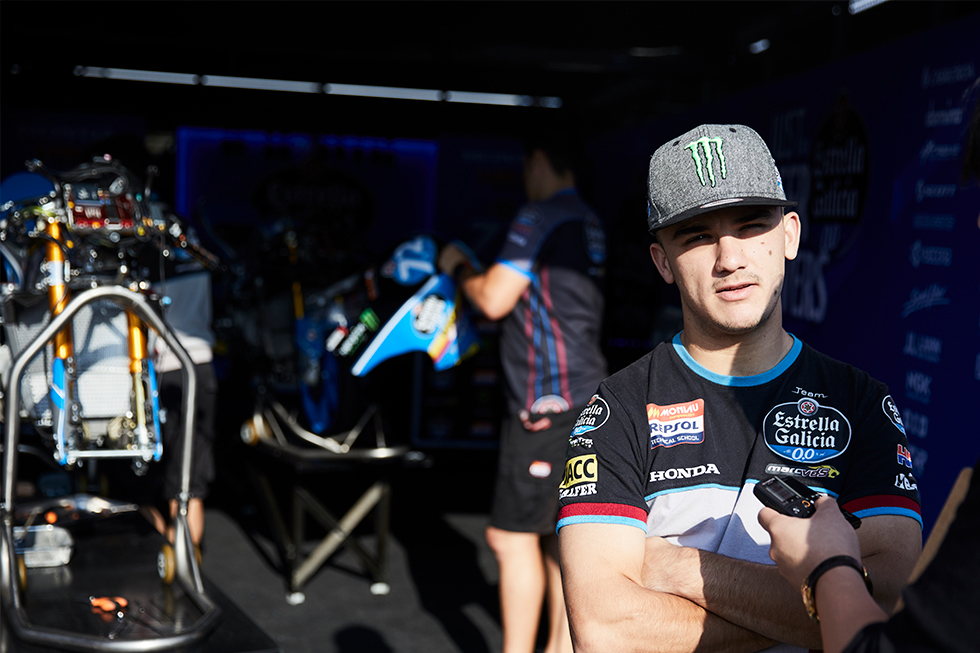 An unforgettable race on an NSF100

“I think it was during a European championship on an NSF100. There was Stefano Manzi, now a Moto2 rider, and Nicolò Bulega and Albert Arenas with whom I compete in Moto3. I set the fastest time in qualifying. The race was close, but I managed to pull ahead on the final lap. I had such a n amazing feeling of achievement.” 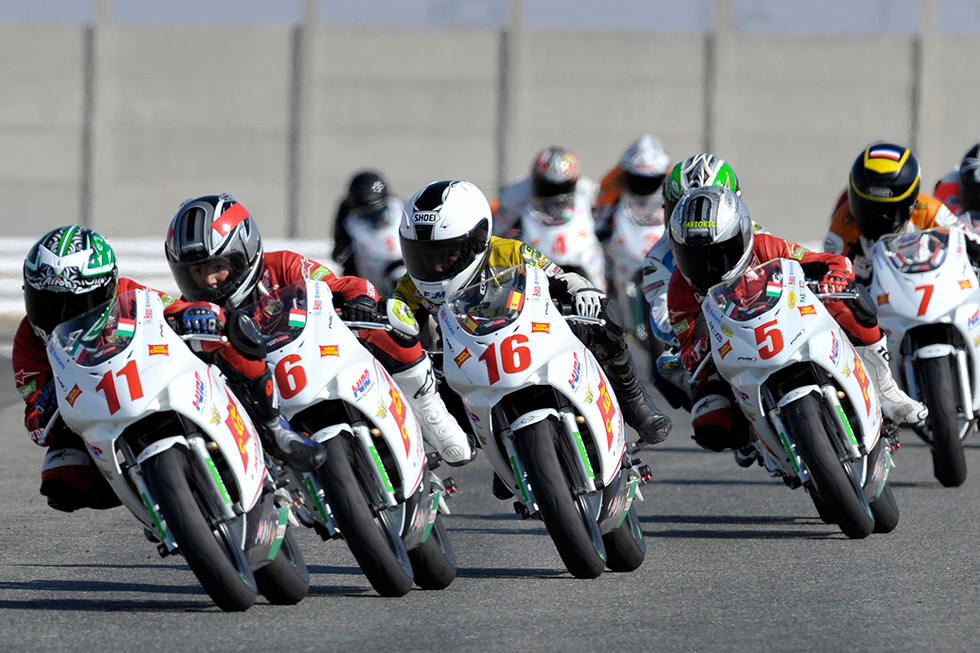 The 17-year-old from Kanagawa, Japan, is one of the Japanese riders challenging the world stage. In 2016 Sasaki became the first Japanese rider to become the Red Bull MotoGP Rookies Cup champion, and began racing in the Moto3 World Championship since 2017. In 2018, he has secured two front row starts to date, displaying fierce speed when it counts, despite being in only his second year in the championship. Sasaki’s first bike was a pocket bike from his grandfather.

“My grandfather and my father both love racing. My first bike, called 74daijiro, was a gift from my grandfather. I rode it for a while, and when I had the urge to ride a ‘bike with gears,’ the NSF100 seemed to be the best choice.” 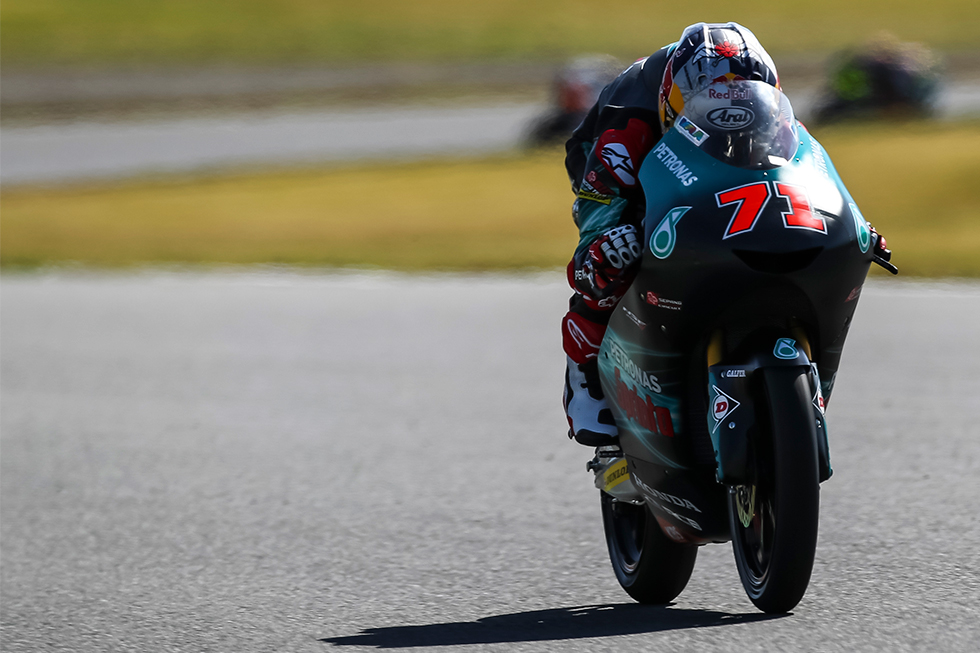 What Sasaki gained from the NSF100

“Out of all the pocket bikes, the NSF100 is the closest you’ll get to a Moto3 machine. It looks similar, and the riding position is similar as well. I think riding an NSF100 helped me to compete in Moto3. I still ride it for offseason practice. It was a big leap from 100cc to 250cc, but my riding position and style were more or less honed on the NSF100, so it was just a matter of getting used to the speed. It was a relatively small step to take.” 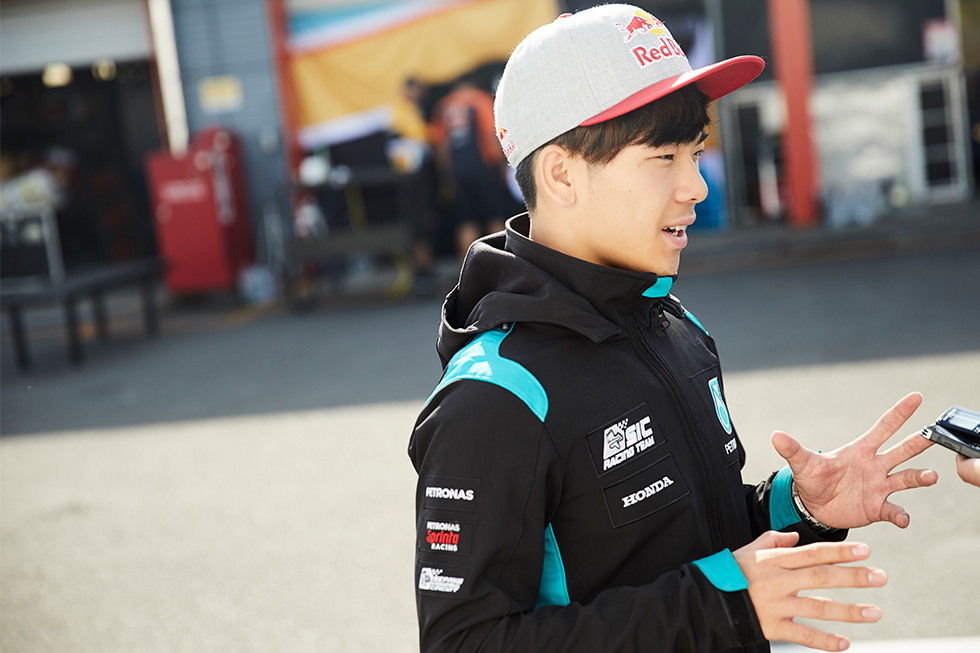 “Since long ago, I have always raced to win, no matter what kind of race, no matter the results. Even in practice, I’ve never thought ‘I’ll only put in half an effort,’ but have always given my 100%. That’s what the NSF100 taught me when I was small. It’s hard to win in Moto3, but as long as I keep on giving it my best, I believe I can win.” 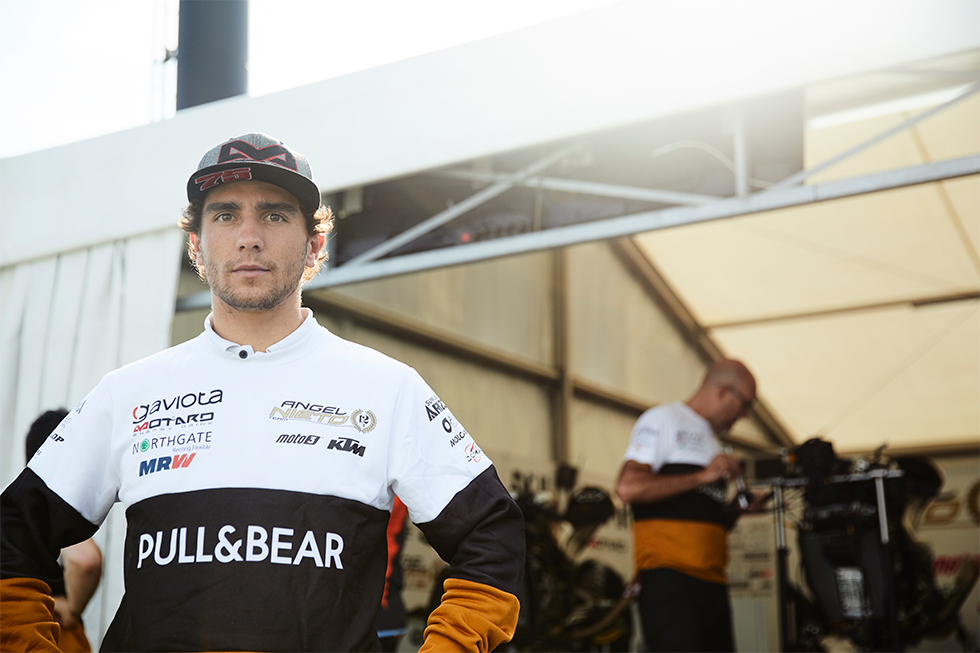 Albert Arenas is a 21-year-old rider from Girona, Spain. Through his father’s love of motorsports, he had become a spectator of MotoGP racing from a very young age. In his fourth season in the Moto3 World Championship, Arenas has won two races so far this year, and is ranked 9th (as of the end of the Australian Grand Prix), and is a rider who shows promise for a successful career.

“My father loved MotoGP, and he would always take me to see the races. His friend had a bike shop, and one day he let me ride a pocket bike. I remember having so much fun. I then started motocross riding on a 2-stroke bike. I stuck to motocross for a while, but switched to road racing after an Italian bike company made me an offer. So I also started competing in the NSF championship.” 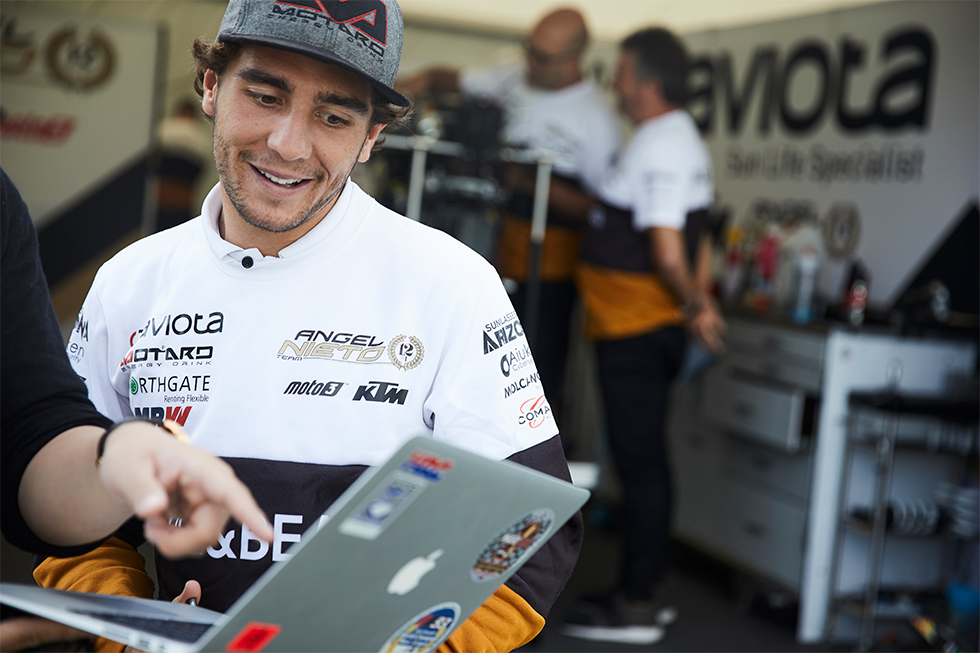 Why the NSF100 is so special

“The NSF100 is the first 4-stroke bike I rode, so I remember it well. It’s very easy to ride, and you could say I learned everything I know about the fundamentals of road racing bikes from it. Like how to do the turns. I competed in the NSF100 championship, but it was a very difficult category, as all riders were on identical bikes. It gives every rider an equal chance, as everyone’s bikes are the same. Another thing special about the NSF100 is that there are NSF100 championships all over the world.” 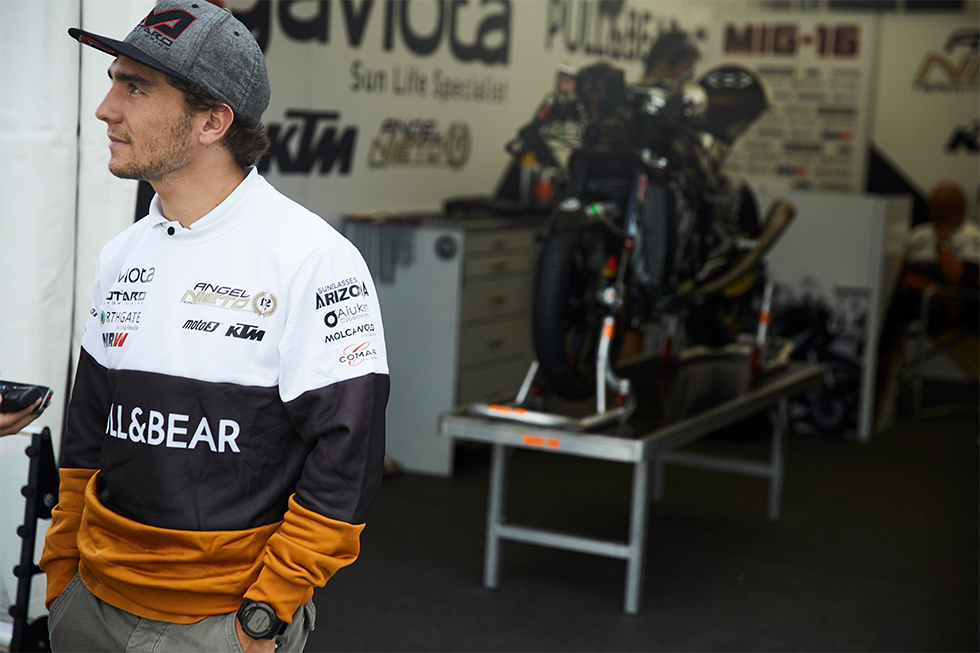 The key to becoming a successful rider

“I think it may be difficult as a rider, but enjoying the race is what is important. If you can sincerely enjoy racing, everything goes in the right direction. It’s important to focus on winning each race, but by having a larger perspective, everything will be clearer. That’s what happened to me.”